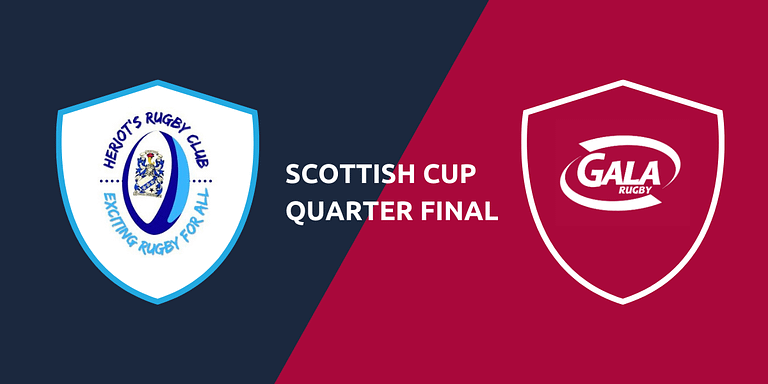 Match report by Alan Lorimer for The Offside Line www.theoffsideline.com

Heriot’s Blues won the try count 5-3 in this Scottish Cup quarter-final, but they still had to fight all the way against Gala before booking their place in the last four.

Throughout the match Heriot’s played with greater structure than their opponents, and had the better of the territory battle, notably in the first quarter. But what really killed off Gala’s chances of success was their inability to defend the driving maul, which cost the Maroons three tries.

Additionally, Gala’s on field decision-making was at times faulty and certainly accounted for two further Heriot’s scores. But to their credit Gala played more instinctively and scored the try of the match when winger Andrew Mitchell finished off a marvellous handling move.

“This was a really frustrating result.” admitted the Gala coach Opeta Palepoi.”We shot ourselves in the foot. We lost our way with errors. You can’t make errors against a team like that. We knew they would use the maul. We just didn’t have the accuracy to stop it. I think we missed leadership today.”

Indeed. With Euan Dods having picked up an injury against Heriot’s in last week’s National One match, which Gala won, the Maroons looked a tad rudderless at times. Moreover, they gave away two needless penalties as their discipline slipped through frustration, and in each instance Heriot’s profited with points.

Heriot’s coach Jamie Parker suggested his side’s mental toughness was key to their win. “I asked at half-time for a bit of guts and the boys came up with the goods,” he said. “Credit to Gala for running us so close. They’re a team who are going to challenge quite soon. They’ve got some good players.”

Despite conceding one of the aforementioned penalties, Robbie Irvine looked very much the part, while his second-row partner Cody Roman put in a steady performance. Heriot’s, too, exuded class in a number of positions. Their back three generally made ground from Gala kicks, centre Louis Meynier was a handful for the Maroons defence, and in No 8 Richard Winton Heriot’s had a powerful back-rower capable of making the hard yards.

Heriot’s looked likely winners when they dominated the opening minutes of the match, and reaped points through a try by former Gala player Craig Robertson after a clever exchange of passes with full-back Charlie Simpson.  Then, after joining a driving maul, Robertson claimed a second try before Cooke got the second of two penalties that kept Gala in touch with their opponents.

Gala began to make inroads, and struck with a move from broken play that involved six players and expert handling, ending with Robbie Irvine deliver the scoring pass to Mitchell and Cooke adding the conversion. Then just before half-time Gala overthrew at a  lineout on their own 22 that allowed Winton to surge through midfield. When he was stopped, Heriot’s moved the ball for Meynier to sail over for his side’s third try and a 15-13 half-time lead.

Gala’s determination at the beginning of the second half was rewarded with a try off the back of a five-metre scrum by Josh Irvine. Cooke converted for a 20-15 lead but minutes later it was Heriot’s who were back in front from a driving maul try by Ross Hutchison and the conversion by Graham Wilson.

Another driving maul and another try for Heriot’s, Daniel Dineen scoring and Wilson converting, extended the Blues’ lead to nine points. Replacement Dean Keddie and Wilson exchanged penalties before teenager Mason Cullen showed why he might be the next Darcy Graham by scorching round the Heriot’s defence. An attempted high tackle by the Blues turned Cullen’s try into one of the penalty variety to leave Gala frustratingly short at the end of an epic encounter.