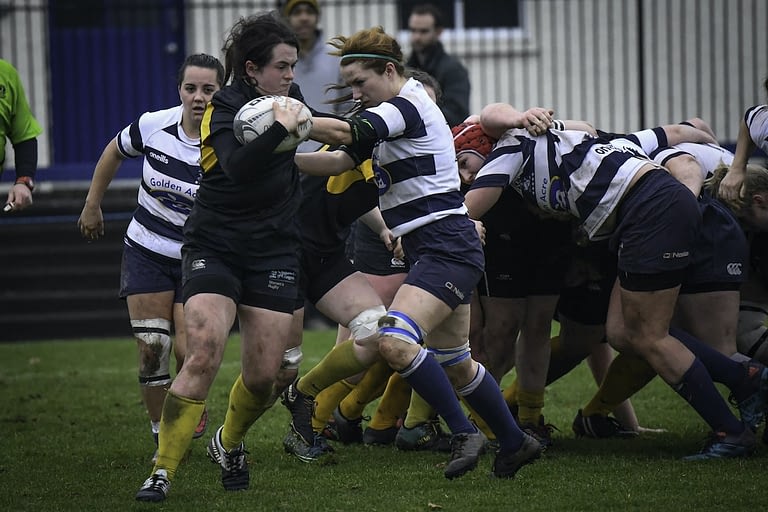 The 74 – 5 win over Glasgow University in front of supporters at Goldenacre was a historic occasion for the Heriot’s Blues Women.

The victory enabled the team to secure top position on the competition table, winning the Tennent’s National League Division 1 title.

This achievement is even more significant given the side was only established in October 2018 and it was the first year the new team had competed in the league.

From the outset of the game Heriot’s Blues Women had an edge over the competition, with their stubborn defence accompanied by a strong attack.

In the first 40 minutes the Heriot’s Blues Women worked hard in defence only conceding five points after a series of penalties saw the team defending their own line for multiple phases.

The second half saw the home side continue to build of the momentum of the first.

Playmakers Annabel Sergeant Jenny Taylor stood out in jersey’s 12 and 10, guiding the attack of the Heriots’ Blues Women’s backline.

Ably supported by their team mates Annabel and Jenny were able to cut through the defence of the opposition to secure four and three tries, respectively, crossing the white wash in both the first and second halves of the match.

Winger Juliet Gold was able to secure her first try in her debut rugby season, putting her training as a former sprinter to good use out wide in the first half.

Pearl Kellie once again showed her pace on the pitch to add another try to an already impressive tally this season.

Kirsty McConnell worked tirelessly in the forward pack bursting through defensive lines to secure two tries for the team. Sophie D’Arcy came in from the wing to support a strong run by Kirsty in the second half leading to a try of her own.

Thomasin Heggie, Jade Courtney and Alison Wilson showed excellent work rate in the forward pack. Several breaks were made by the trio through the oppositions defensive line with impressive defence needed to deny Alison a runaway try in the first half.

Co-captain Ellie Wilson made seven conversions throughout the contest adding 14 points with her boot to the final score.