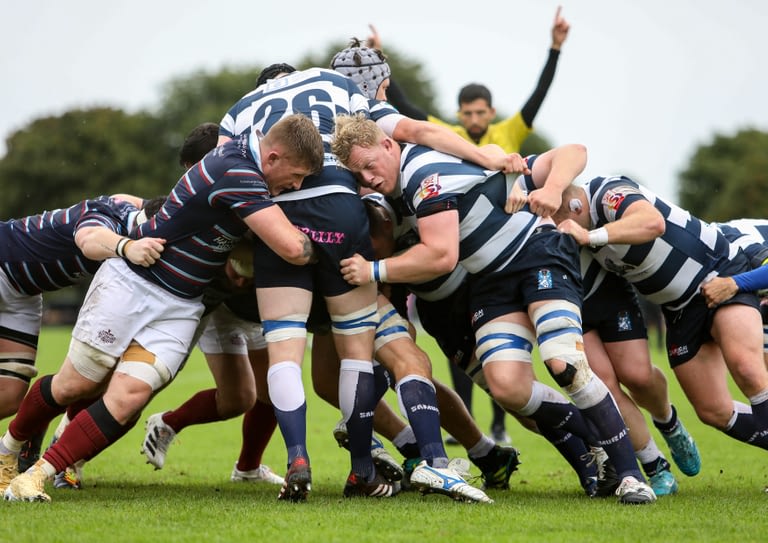 HERIOT’S turned on the style to post a win that was every bit as comprehensive as the scoreline suggests. They raced from the blocks and built early momentum that they never looked likely to surrender, and blew away a Watsonians side that had won its opening three fixtures.

However, despite the comprehensive nature of the win, there is no danger of home coach Andrew Kelly getting carried away by two wins on the trot, although he does see progress.

“We executed what we wanted to do this week and we got a performance,” was his summation. “I think we were just more mature about how we played. We had a bit more confidence and, really importantly, we played in the right areas and didn’t give away many penalties.”

That said, he still saw weaknesses that he wants to address before the trip to meet Ayrshire Bulls next weekend, adding: “Our first 20 minutes was great, controlled rugby and the second 20 minutes of the first half we started going back to what we had done at the start of the season. So we know where we have to be to win games.

His Watsonians counterpart Fergus Pringle was at a loss to explain the lacklustre effort of his men, saying: “We didn’t start well and fair play to Heriot’s, they were really on it from the first minute. It just shows the fine margins – we were off it a bit and they were on it, they were just the better team.”

While admitting that closer analysis may reveal some positive aspects, he was somewhat downcast in the immediate aftermath, stating: “There’s not much to take from that game. We know we were outplayed in every area. The one thing that went really well was our scrum. We put them under pressure at scrum time. Other than that, there weren’t too many positives. We have to learn from that and go away and put things right and come back stronger.”

The hosts drew first blood with three minutes on the clock. Bruce Houston booted a penalty into touch on the opposition 22 and a subsequent drive created the platform for Lloyd Wheeldon to feed Stuart Edwards, who passed to Houston, and his perfectly timed release sent Ross Jones hurtling over between the sticks. Houston added the conversion then took the points tally into double figures with a 35-metre penalty as the home side continued to dominate proceedings.

Heriot’s remained in the ascendancy and they repelled all attempts by the league leaders to visit the 22, one thumping tackle by Wheeldon on Cal Davies epitomising the determination in the home ranks. With 19 minutes played, a fumbled kick gave Watsonians scrum possession on the home 10 metre line and a penalty at the set piece allowed Marc Morrison to claw back three points.

Heriot’s were quickly back on the offensive and, although the next few visits to the Watsonians half proved fruitless, their urgency in defence meant they were constantly on the front foot, making further scoring seem inevitable.

However, errors at key moments meant the score line was unchanged at half time, although the hosts ended the first period with Andrew Nimmo in the sin-bin after a scrum offence.

The visitors were enlivened by whatever was said at half time, and a mazy run by Harvey Elms was a sign of their greater intent. The high tempo restart continued with a penalty, which was thumped into touch by Morrison. The ball was pouched at the lineout and, although Davies was held just short of the whitewash, Steven Longwell completed the job. Morrison’s conversion attempt ratted back off the post.

Stung into action, Heriot’s launched a fresh offensive. almost broke through with a rampaging run. The recycled ball was moved wide to Edwards, whose cleverly disguised pass allowed Robert Kay to sprint over. Houston landed the conversion then kept the scoreboard ticking over with a well-struck penalty.

Then, he extinguished any possibility of a fightback when he calmly stroked over a drop goal – the first ever in Super6 rugby – that added gloss to a polished Heriot’s performance.

Man-of-the-Match: Although Stuart Edwards produced a performance that illuminated an overcast Goldenacre, his effort was eclipsed by team-mate Bruce Houston whose flawless boot and excellent game management were instrumental in the win.

Talking Point: Heriot’s stepped up a gear in this performance and, with their confidence on the rise, it will be interesting to see how much further they can go.