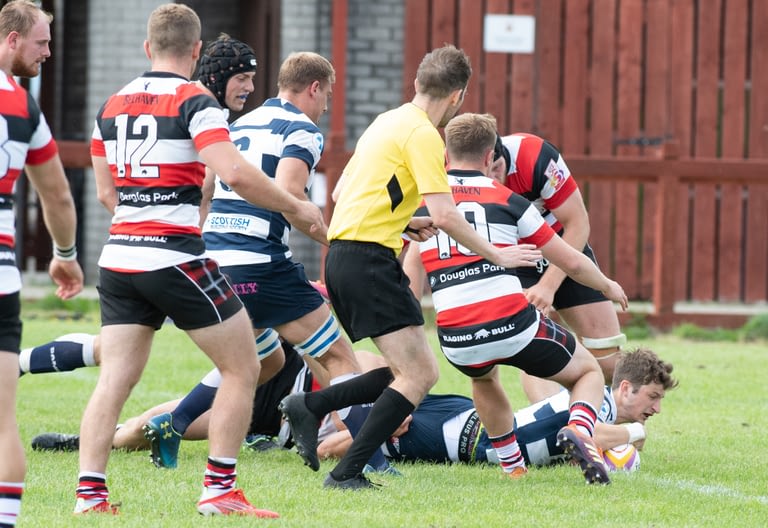 HERIOT’S broke their FOSROC Super6 duck when they managed to grind out a narrow win over a Stirling County side that has yet to taste success. Victorious coach Andrew Kelly was far from satisfied with certain aspects of the showing, but was happy to trade the shortcomings for a result that he hopes will be a springboard to further success over the coming weeks.

“I’m obviously very pleased to get the win but still a bit disappointed by the performance,” he said. “We are playing like a team that hasn’t got confidence yet, so hopefully that will give us a boost.”

The key to the positive outcome was a change in attitude at the start of the second half. “We said that if we cut down our error rate and play in the right areas of the pitch, we’ll get the rewards. We did it for about 10 minutes then didn’t do it for the next 30,” added Kelly.

However, overall, he was pleased with the result, saying: “Winning against a good team, away from home and not playing our best, is a positive.”

There was more disappointment in the County camp, with Ben Cairns suggesting that it’s time for a realistic assessment. “There are only so many weeks you can keep telling the boys ‘we’re playing enough rugby to win, we need to stop shooting ourselves in the foot, it will come, we’re pleased with the effort,’ and at some point say that ‘we are just not executing and doing what we do in training’,” he said.

It was another performance in which his team had sufficient possession to win, yet once again came out on the wrong side of the result. “It’s frustrating. There’s definitely a balance between playing that quality rugby that we did in the first 20 minutes and not forcing the final pass – just go another phase. We’re not getting that balance right.”

It was difficult to argue with his view that County lost a game they should have won, “We are playing enough rugby to win games, we just need that to translate into points. That’s about how we manage the game a bit better in terms of building pressure,” added Cairns.

The match opened at a high tempo, and Archie Russell was first to make an impression with a bristling run that carried play into opposition territory where the move faltered on a subsequent fumble. The hosts maintained the pressure and Stuart Edwards had to look lively to get the better of Andrew Goudie who had charged down a Nathan Chamberlain clearance and hacked ahead.

With 10 minutes on the clock, Grant Hughes looked to have freed Tom Roche for a clear run to the line, but the pass was deemed to have gone forward. County came even closer to breaking the deadlock a couple of minutes later, but this time Ross Jones nipped in to touch down ahead of Hughes.

A score for County was inevitable and the surprise was that it took 22 minutes to arrive. Heriot’s failed to roll away, presenting Goudie with a straightforward kick which he steered between the sticks.

The visitors responded immediately, earning a penalty from the restart. That was booted into touch and, when Rob Kay was thwarted just short of the whitewash after a series of drives, Ruaridh Leishman [Player sponsored by Kings Wark Bar & Restaurant] picked up and plunged over for an unconverted try.

Back came County and Russell made ground before Roche chipped through. Alex Ball [Player sponsored by Ian Gray] gathered and threw out a pass that failed to find a recipient, allowing the alert Kristian Kay to pounce for the score, with Goudie adding the extras.

Kay then sparked another assault on the Heriot’s defence with a searing break from deep as the game opened up, although their next points again came courtesy of Goudie’s boot.

By the interval, the gap had narrowed to a single point after the final play of the half saw Heriot’s bang a penalty into touch then drive towards the home line. Callum Cruickshank was deemed to have pulled down the maul and the referee awarded a penalty try then despatched the offender to the sin-bin.

Chamberlain was off target with a penalty effort shortly after the restart, but Heriot’s had stepped up a gear and they enjoyed their best spell of the game. They seized the lead in 50 minutes when Alex Ball picked up 10 metres from the home line and with two neat side steps created the space to cross for a score, converted by Bruce Houston [Player sponsored by The Cruikshank Family].

County were up against it at this stage, but showed plenty of character as they battled back into the contest just after the hour when a slick handling move saw the ball out to Russell who crashed over. Goudie was off target with the conversion and also missed with a penalty effort after a high tackle that earned a yellow-card for Heriot’s flanker Iain Wilson [Player sponsored by Millican Associates].

The closing minutes featured some flowing rugby by both sides, but neither team managed to add to their points haul, leaving the visitors to celebrate a breakthrough win, while the hosts were left wondering what it will take to secure that elusive victory.

Man-of-the-match: There were several contenders, but for sheer effort and making the hard yards, as well as his try scoring contribution, Alex Ball just edged it.

Talking point: Heriot’s won’t be getting carried away with the result, but winning ugly is important and will send them into next Saturday’s clash with top of the table Watsonians in decent fettle.