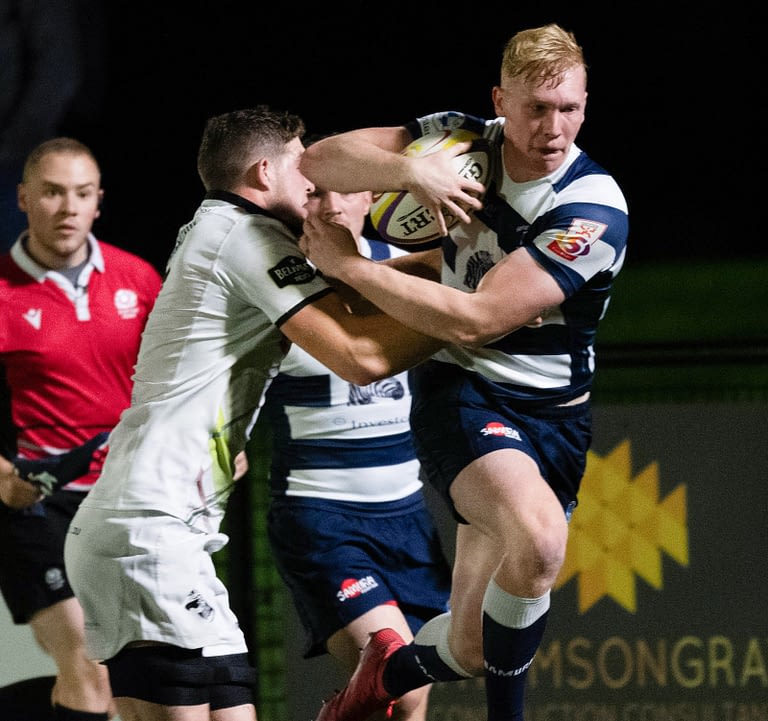 Match report by Alan Lorimer Renton for The Offside Line

HIGH-FLYING Southern Knights maintained their lofty altitude in the FOSROC Super6 after twice coming from behind to defeat an inspired Heriot’s side that late in the game looked to be heading for victory after taking a 29-21 lead and collecting a bonus point.

But in the end it was not to be the win that Heriot’s were desperately seeking despite a performance from the Goldenacre men of scintillating running rugby that lit up a compelling match, making it a powerful advert for Super6 rugby.

For their part, Knights might consider themselves a trifle fortunate to finish on top, but that would be to discount their will to stay in the game both in the first half and the last ten minutes, a quality which differentiates teams who win and teams who don’t.

“We got there but it was probably a get out of jail card if I’m being honest,” conceded Rob Chrystie, the Southern Knights head coach. “Credit to Heriot’s, I thought they played really well in comparison to where they were last week.

“They came with a freeness and a willingness to play and they were pretty accurate as well. And that put us under a lot of pressure. We weren’t all that clever at times. We have to be far more accurate around the pitch. It was disappointing that we made a lot of basic errors after being on the back of some really good momentum.”

Even if Chrystie might have been disappointed about certain aspects of his side’s performance he ought to pleased with other areas of play, not least the contribution of replacement Andrew Mitchell, who twice used his power and pace to create two of the Knights’ tries.

For Heriot’s, this was redemption with only a scant reward – a bonus point for their four try haul. The visitors played with panache at times behind the scrum where stand-off Nathan Chamberlain showed his experience of being part of the Edinburgh Rugby squad.

If Heriot’s had wanted a better rebound from their heavy defeat last weekend by Ayrshire Bulls they would have struggled to do more than what they produced in their opening salvos in the first ten minutes of play.

Yet they had to cope with the setback of conceding a try to the Knights after only two minutes albeit in rather fortuitous circumstances. James Head tried to puncture the Heriot’s defence with a charge only to have the ball ripped from him in the tackle .

That ball, however, fell straight into the arms of Knights flanker Alan Ferrie, who had the strength to break a tackle and score under the posts, leaving Jason Baggott with the simplest of conversion kicks.

But instead of acting as a spur to Southern Knights, the opening try merely pressed the ‘action’ button for a Heriot’s side that looked to have been let off the leash and infused with a determination to play attacking rugby.

The impressive back-row, Callum Marshall,  kick-started the Heriot’s response with a side-stepping run from the restart but it was the quick thinking and vision of scrum-half Alex Ball that produced the points, the number nine darting through from a ruck to score a fine try, converted by Chamberlain to level the scores.

Heriot’s had little time to catch breath before they were again on the scoresheet, this time the outside backs producing genuinely slick handling for Ross Jones to race down the left touchline before passing to try scorer James Couper.

The try was unconverted but that mattered little to a Heriot’s side who maintained their attacking impetus, and when they won a series of penalties near the line it was pick-and-drive time, before Ball cleverly brought in the backs resulting in a try and conversion by Chamberlain.

Knights, however, had not thrown in the towel and after gaining ground through grinding forward play they were rewarded with a second try, this time made by the powerful running of Mitchell and support play by Baggott who ran in under the posts before converting his own try to leave his side trailing 14-19 at the break.

Five tries in the first half, so could the second period of play live up to the excitement of the opening forty minutes? Yes, came the answer as Southern Knights produced their own brand of attacking rugby, with Baggott igniting a move by running from deep inside his own 22. Two phases later it was a break by Mitchell, the support of fellow replacement Paddy Anderson and the finish of debutant Freddie Owsley that levelled the scores, Baggott’s conversion putting Knights into a slight lead.

Not for long, though. Heriot’s again moved the ball slickly and it was replacement Ben Evans’ short pass that put Callum Young in the clear. The ex-Jed winger then powered through a couple of tackles before outpacing the defence on his way to scoring under the posts.

Replacement Bruce Houston converted before adding a penalty to put Heriot’s ahead by 29-21.  The eight point lead gave Heriot’s a useful cushion until replacement prop Grant Shiells took a pass from fellow sub Fraser Renwick to score, usefully near the posts allowing Baggott to maintain his kicking successes.

Knights then reached into their locker for a favourite weapon, the driving maul. Such was the pace that Knights generated in the maul that Heriot’s were forced to bring it down illegally, conceding a penalty try that gave the home side a 35-29 lead.

There was still a chance that Heriot’s could strike back but again fortune favoured the Knights when replacement Billy Wara picked up loose ball from a turnover before sprinting from his own half to clock up his side’s sixth try, the unfailing Baggott again adding the extras to seal an important win.

Man-of-the-Match: The official man of the match was Callum Young

Talking point: What a thrilling game that dispelled any doubts about FOSROC Super6 being a top quality product.  Heriot’s really lit up this game with some excellent back play and mobile forward work, and if that can be replicated in the two games they have left then the scar of that defeat by Ayrshire Bulls will have been repaired.  For their part, Knights, despite a long list of injuries, looked to be comfortably heading for the final at The DAM Health Stadium (Mini-Murrayfield).