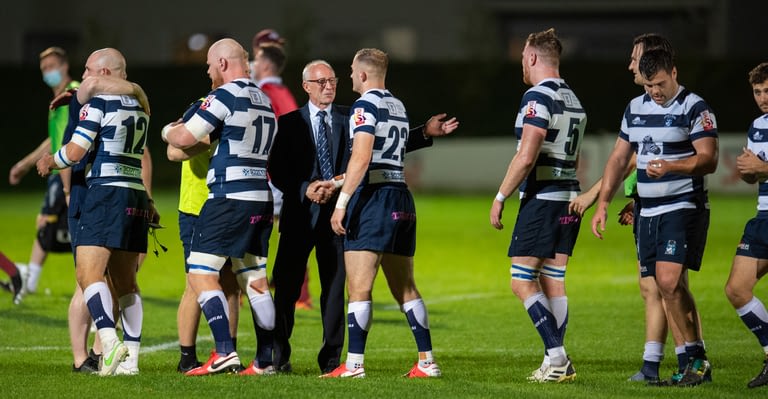 HERIOT’s took the honours in a nerve-tingling FOSROC Super6 affair which was decided by an injury-time kick that secured home-and-away victories for the Goldenacre men over their Edinburgh rivals. It took a remarkable turnaround by the visitors to overturn a half-time deficit that was a fair reflection of the Watsonians performance in the opening 40 minutes. But a second-half effort brimming with determination earned the victory.

For Heriot’s coach Andrew Kelly, the character of his players was key. “We went in 17-3 down at half-time and I thought we had played a lot of rugby and just had moments of ill-discipline and just giving the ball away. I thought our build-up play was great, our set piece was great, but we were just giving the ball away and had poor discipline”, he said. “I’m absolutely delighted – great heart from the guys to come back from that deficit.”

Heriot’s had comfortably dismantled Watsonians in the reverse fixture last month, inflicting the only defeat so far on Fergus Pringle’s men. That result was built on a blistering start by the Goldenacre side. Lessons had clearly been learned as Watsonians raced from the traps and a thumping run by Sam Grahamslaw after three minutes earned a penalty for not rolling away. Marc Morrison had no problem in bagging the three points with a kick from 30 metres.

The first Heriot’s attack of note came with 10 minutes on the clock, but they earned only a scrum for their efforts. A penalty from the resulting scrum was despatched into touch and another award from the ensuing lineout got the same treatment. Neither effort yielded points, and Heriot’s ended that spell in the ascendancy empty-handed.

The next visit to opposition territory produced another penalty, and on this occasion Bruce Houston (sponsored by The Cruikshank Family) went for the sticks but saw his kick drift just wide. He made the same selection after another piercing run by Rory McMichael (sponsored by Golden Acre Foods) was halted illegally. This time the stand-off was on target with a 40-metre effort to square matters.

Watsonians sought an instant riposte. A penalty into touch was the platform for a drive that was foiled just short of the whitewash, albeit illegally. A repeat performance – Cal Davies to Michael Badenhorst and a surge for the line – was again stopped unfairly. This time the referee awarded a penalty try and sent Fraser Hastie (sponsored by ALBIE) to the sin bin.

Heriot’s survived Hastie’s absence without conceding further points, but, just as the lock was serving the final couple of minutes of his time, his captain Iain Wilson (sponsored by Millican Associates) was sent for 10 minutes on the sidelines after an illegal tackle.

By the interval, Watsonians had taken advantage of their numerical advantage and the lead had grown, with Badenhorst forcing his way over from close range for an injury-time score, and Morrison adding the conversion.

Within two minutes of the restart, Heriot’s were back in the game. Robert Kay (sponsored by The Grunions) made ground with a powerful run and the move was continued when Lloyd Wheeldon (sponsored by SS Removals) darted into the Watsonians 22 before flipping the ball to Stuart Edwards (sponsored by ALBIE) who dotted down in the corner for an unconverted score.

Watsonians regained the territorial advantage with a thumping run that took Sam Daly deep into the away 22, but a period of sustained pressure proved fruitless. And the visitors took full advantage when Michael Liness (sponsored by O’Connors Bar) was stopped illegally as Heriot’s drove for the line after a penalty. The referee awarded a second penalty try of the night and showed Steven Longwell a yellow card.

Heriot’s took the lead for the first time when Nathan Chamberlain booted a penalty. There was more to come. Morrison looked to have snatched the win when he booted another penalty, but there was still time for the visitors to launch a final bid for glory. A scrum penalty in the final play left Chamberlain with a penalty from just inside the home half and he hammered over the kick to earn the win.

“It was the kind of game that you thought wasn’t over until the final whistle went,” said Watsonians coach Fergus Pringle. “Fair play to Heriots for coming back from 17-3 down. I think the crucial part of the game for me was at the start of the second half when we had some dominance but we didn’t convert it into points.”

Leaving aside their club loyalties, both coaches pointed to the match as further evidence of the tournament’s success.  “Anyone can beat anyone on the day,” added Kelly. “If you switch off for 20 minutes of the game, you’ll get punished. The quality of all the teams is great, and everyone has got to be on their game.”

Pringle was also upbeat, saying: “If you take a step back from everything, another great advert for Super6 – a very close game, a derby where it’s very close and both teams got stuck in.”

Player of the match: The official Player of the Match from Rhona Hume, Director of Women’s Rugby at Heriot’s, on the night was Sam Daly of the losing side. Very closely followed by Carl Main, Rory McMichael, outstanding and Stuart Edwards was incredible.

Talking point: A breathless finale to a cracking contest that underlined the intensity of the competition and confirmed that any drop in concentration will be punished.