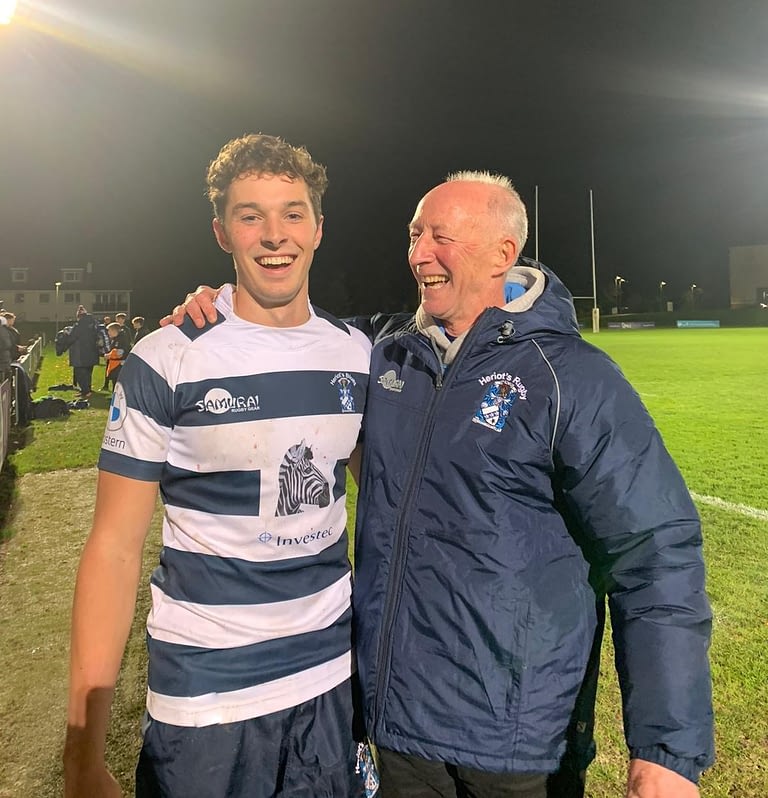 The Blues Men 1XV make it their 7th win in a row after defeating Watsonian FC 1XV 17 – 36 at Myreside last Friday, retaining top position in the Tennent’s League National Division 1.

The Edinburgh derby proved exciting from the very first minute with HBM full back Jacob Lineen scoring the first try of the game in just 41 seconds from kick off as part of a lovely handling move. The try remained unconverted, so Heriot’s led 0-5.

Watsonian FC responded quickly with a try of their own after hard work from the forwards. The try was converted (7-5)

Next up was Lewis Govenlock to score for Heriot’s, after a team effort going through the hands with offloads, the flanker managed to break free of Watsonian’s defence and get over the whitewash. The try was converted by scrum half Graham Wilson to take the lead once more (7-12).

At the 20-minute mark Watsonian FC were awarded a penalty, which was successful, bringing them back into the game at 10-12. HBM received a yellow card, bringing them down to 14 players. However, they did not let this faze them, they remained composed and worked hard to retain the ball, which resulted in two consecutive tries for Heriot’s, only 2 minutes apart from each other. The first by winger Craig Robertson (who came into the team last minute to replace injured Charlie Simpson), which remained unconverted and the other by Graham Wilson which resulted from HBM great work in the tight around the fringes. Graham converted his own try (10-24).

Just before the half time whistle, HBM managed to score another try from Craig Robertson, widening the gap between Heriot’s and Watsonian FC, keeping the Blues well out of reach of the home team before heading into the half time break.

The second half began and within 5 minutes Watsonian FC scored the first try of the half which was converted (17-31).

Heriot’s managed to react quickly with a try of their own, which would be the last of the game. Once again it was full back Jacob Lineen who scored the try, starting from the side-line in open play he managed to skilfully run through defenders leaving them behind one by one, and scoring out wide.

Heriot’s proved too strong for their local derby rivals, who belied their league position and gave a strong account of themselves – just what the locals would want on a Friday night fixture under the lights. It was an enjoyable and feisty game, with an appropriate amount of needle, with a few dashes of stardust to keep the highlight reels ticking over. An excellent 5 points for the Blues.

Heriot’s Blues 1XV’s next game is this Saturday, 27th November at Goldenacre against Melrose at 2pm.

POTM was awarded by President Ian Duckworth to Full Back Jacob Lineen for his two amazing solo tries and all-round strong performance.