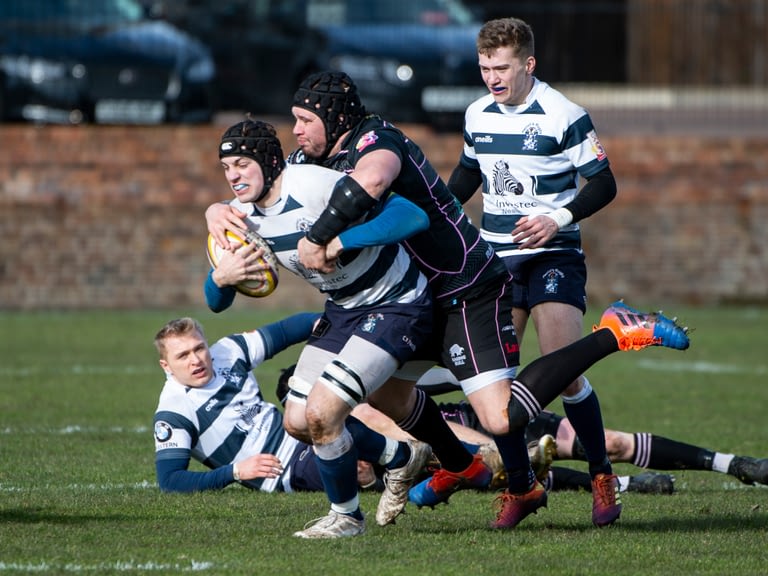 Match report by Stuart Bathgate for The Offside Line www.theoffsideline.com

Heriot’s are not yet entirely sure who they will meet in the Super6 semi-final later this month, but they do know that they will be at home, and right now that is by far the most important thing. They had to take charge of the game twice against the Ayrshire Bulls, being pegged back from 12-0 to 12-10 before making sure of the victory, but they were deserved winners in the end and will go into the play-offs in confident mood.

On the balance of probabilities, the Bulls will have to come back to Goldenacre for the semis, which pit first against fourth and second against third. The fixtures for the semis will only be definitively known once the outstanding regular-season game between Watsonians and the Southern Knights is played, but most potential outcomes for that match would mean a repeat of this afternoon’s game on Saturday 21st.

As things stand, Heriot’s are top by two points, having claimed a bonus point here thanks to a fourth try very late in the game. Whether their Edinburgh rivals overtake them by beating the Knights is academic as far as head coach Phil Smith is concerned.

“Our aim all along was to get a home semi and allow the club to build some momentum behind Super6,” he said. “The Blues are playing Boroughmuir the same day [in National One], so we’ll try and make it a really big day for the club.”

It will certainly be a big day for Heriot’s if Smith’s side win through to the final, but to do that they will have to cut down on the mistakes and indiscipline. Jason Hill was yellow-carded early in the second half then again two minutes from time, meaning he was sent off, and although the latter offence did not affect the outcome, the No 8’s coach was frustrated by it all the same – as he was by the period of laxness that allowed the Bulls back into the match.

“At 12-10 we’d started building up the error count,” Smith added. “We’d maybe played too much in our own areas, and that is something we’ll have to learn to do better.”

Conditions were solid enough underfoot, but the high number of dropped or misplaced passes was testament to the difficulty of the wind, and to an extent made some of those errors understandable. Heriot’s were well on top in a scoreless opening 20 minutes as both sides took their time to come to terms with those conditions, but the closest they came to opening their account was when a drive from a lineout was stopped illegally. That move had come from a penalty to touch, and they tried to repeat it, but the Bulls stole the throw-in and the chance was gone.

Then, having put in a lot of effort for no reward in that opening quarter, the home side took the lead just past the midway point of the half thanks to a simple gift. The Bulls seemed to have the ball under control at the back of the scrum, but it came loose, and Hill picked it up to run in unopposed from 40 metres out, with Ross Jones adding a tricky conversion.

Ayrshire had barely figured as an attacking force up to that point, and when they did eventually make their way into the opposition 22 for the first time they were soon turned over.  In the closing minutes of the half, they established a more solid platform thanks to a couple of dominant scrums, and for a moment a score seemed inevitable. But then Heriot’s brought Struan Cessford on at tighthead for Josh Scott, who had been coming under severe pressure from Gordon Reid in the scrum, and the improvement was immediate. From being penalised several times in the setpiece, they were awarded a scrum penalty five metres out, and the half was ended without further incident.

Reid himself limped off minutes into the second half, and although Ayrshire began it brightly, it was Heriot’s who struck first to increase their lead. A knock-on in midfield by the visitors provided the opportunity for a broken-play counter-attack down the right, and after the first assault on the line was halted illegally, lock Callum Marshall collected and made the last few metres for an unconverted try.

That stung the Bulls into action, and moments later they were off the mark with a Ross Thompson penalty, awarded after Hill had deliberately knocked on as a dangerous overlap threatened. The Heriot’s No 8 was shown a yellow card for his offence, and Ayrshire were galvanised by the man advantage and upped their tempo.

They were just denied a try immediately prior to Hill’s return when Sam Kitchen was held up, but advantage was being played, and from the resulting scrum No 8 Blair Macpherson got over from close range. Thompson converted, and from being a dozen points down the Bulls were a mere two adrift with quarter of an hour to play.

It had been such a tightly-contested affair up to then that it appeared likely that there would be just one more score, but in fact there were three tries as well as a second yellow for Hill in a frantic final eight minutes. The first went the way of Heriot’s, when Jack McClean broke free from a loose ball and found Dan Nutton up in support. Nutton touched down between the posts, Thompson converted, and that was the victory assured for the home team.

There was still time for Heriot’s to emphasise their win, however, with a try by substitute Harry Paterson in the right corner barely two minutes after he had come on.

Another conversion from Thompson took the tally to 26-10, but there was still some fight left in the Bulls, and after Hill had seen yellow then red for a deliberate knock-on, their substitute Alex McGuire had the last word with an unconverted try from close range. Having been sent off for a second yellow rather than a straight red, Hill will be available for the semi-final.

The 5-0 loss in terms of match points was not an accurate reflection of the contribution the Bulls made to the game, and their coach, Peter Murchie, was able to point to their superiority in some aspects of the contest. “Our maul was pretty dominant, our scrum at times was pretty dominant, and we certainly had our chances,” he said. “We had quite a lot of momentum when we got it back to a two-point game, but you’ve got to credit Heriot’s they’ve stuck in there and managed to get the next score.

“You can’t put it down to any one moment. We just got too many of the little momentum swings against us, and a lot of their scores were pretty soft from our perspective.

“There was a massive carrot there for us in that winning the game would have given us a home semi-final, but now we’ve got three weeks to prepare really well, and that has to be our focus now.”