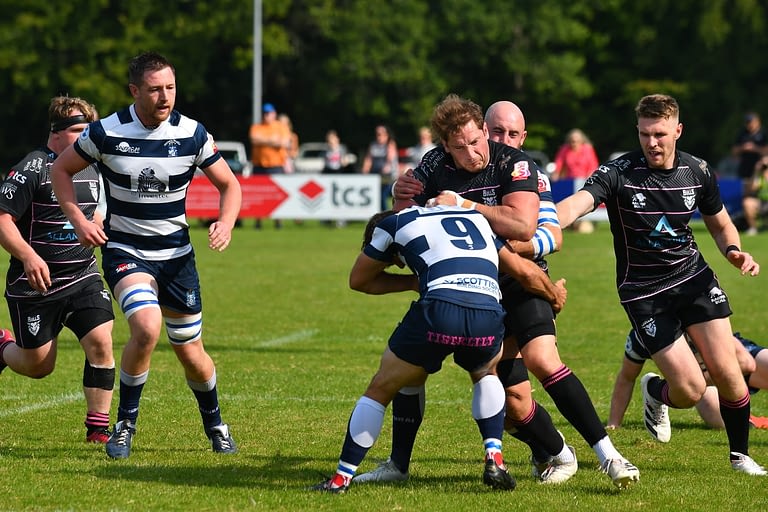 A MATCH which demonstrated the truth in that old line about forwards winning matches and backs deciding by how much. Apart from a few wayward line-outs in the first half, the Ayrshire Bulls pack bossed this contest from practically the first minute to the last, and the backline kept their side of the bargain by being both aggressive and smart, and by taking their chances when they came along.

Skipper and No8 Blair MacPherson led the charge, scoring the first two tries as the Bulls established a commanding 12-0 lead in the opening quarter, and then making it a hat-trick just before the end, but there were heroes all over the park for the home team. Thanks

The Bulls came into this match with a record of one win from four matches so far in the 2021 Super6 campaign, and last Friday’s injury-time loss at Stirling County had really stung, but the team certainly delivered the response head coach Pat MacArthur was looking for here.

“There has been a lot of tough times over the last few weeks because we know what potential we have in this squad, and we believe in what we’re doing every Monday, Tuesday and Thursday, but it’s just not been clicking for the boys,” he said.

“It wasn’t a nice place to be at the start of this week, but we’ve kept the faith, and that was the first step for us, that’s the best way to put it. We’re not the finished article, but it is a first step in the right direction.

“It has been a steep learning curve,” he added. “If you look at the spine of our team, there is a lot of young boys in there, but they are learning and we saw a reaction from last week and from the start of the season.”

Bulls took an eighth-minute lead when an excellent passage of play featuring powerful bursts and neat offloads from several forwards including Jamie Drummond and Yaree Fantini culminated in MacPherson barging over on the left.

Heriot’s couldn’t get their line-out drive going against some ferocious counter-mauling from the hosts, with MacPherson doing brilliantly to wrestle possession five yards from his own line and visiting scrum-half Lloyd Wheeldon being harassed into a knock-on two minutes later.

The visiting scrum wasn’t fairing much better, coughing up a penalty which prompted another impressive passage of play from the hosts. That led to MacPherson muscling in for his second try, and this time Tom Jordan added the conversion which made it 12-0 with 20 minutes played.

Bulls were now motoring and scored again just two minutes later when Fantini burst through midfield and Harry Warr angled an excellent grubber into the in-goal area for Elias Cavan to run onto and score.

Jordan hit the bar with a long-range scrum-penalty attempt, then Warr and Ryan Sweeney combined well though the middle but the final pass which would have sent Ed Bloodworth under the posts didn’t go to hand.

Another scrum penalty conceded by Heriot’s saw Jordan extend the lead to 20 points, then Heriot’s finally got themselves into the game just before the break when Callum Marshall, Ruairidh Leishman and Ross Jones swept upfield and James Couper finished off.

Houston had a chance to narrow the gap to 10 points early in the second half, but his penalty was off target, and Bulls claimed the bonus point when Bobby Beattie ran back a goal-line drop-out from Houston with real venomous intent and then released Robbie Nairn for an unchallenged dash to the line. Jordan added the conversion.

Replacement scrum-half Jordan Lenac eventually got try number five, but had to work hard to rip the ball away from team-mate Alex McGuire, who clearly fancied claiming the points for himself after a powerful line-out drive marched the Heriot’s pack back over their own line.

MacPherson burrowed over for his hat-trick with just a few minutes left, after another relentless period of pressure from the hosts.

Heriot’s head coach Andrew Kelly was commendably composed afterwards, because this must have been a tough one to swallow, especially on the back of his side’s excellent demolition of previously unbeaten Watsonians last weekend.

“Fair play to Ayr, they came out and started really well, and from the first maul they just won the physical contest around the pitch, really,” he said. “They put us under a lot of pressure at breakdown, they nullified our maul, and we just couldn’t get going.

“Everyone has got to be honest with themselves and have a look at their performance then take it from there. We need to do that as coaches and as players. We’ll come back stronger from this, but we just need to have a bit of honesty within the group.”

Man-of-the-Match: Ryan Sweeney got the official award, and he did play a full role in an excellent back-row performance for the hosts, but The Offside Line cannot see past hat-trick hero Blair MacPherson.

Talking Point: Having played so well to topple Watsonians last weekend, Heriot’s were simply not at the races here, and there are plenty of experienced players in that team who need to start standing up to be counted during the second half of the season.